Trenbolone sometimes referred to as just “Tren”, is among the most powerful and popular steroids used by athletes and bodybuilders. Trenbolone can improve muscle mass vastly, along with increasing the efficiency of bodily processes such as absorbing minerals and synthesizing proteins. It’s commonly used as an illicit performance enhancer by athletes as the effects are so potent.

Trenbolone, also known as trienbolone or trienolone, has gained quite a reputation for being an efficient fat-burner as well as a bulking agent that allows you to get better gains than through just weight training.

There are three primary forms of Trenbolone; Trenbolone Acetate, Trenbolone Enanthate, and Trenbolone Cyclohexylmethylcarbonate (Parabolan). The main difference between the types of Trenbolone is their half-life; or how long they stay in the body.

You are presented with a few choices when buying Trenbolone. They are Trenbolone Acetate (Tren Ace), Trenbolone Enanthate (Tren-E). The differences between them are quite small really. They can be found either in capsule form or in powder form for you to make your pills or inject them.

Trenbolone Acetate contains roughly 87g of pure Trenbolone per 100mg, while Trenbolone Enanthate contains 72mg per 100mg. They are made using different formulas and have different half-lives as a result. The shorter half-life belongs to Trenbolone Ace. Tren Ace needs to be taken more often to get optimum results. Tren-E has a longer half-life, and so requires smaller doses. Overall Enanthate is often harder to find and more expensive than Ace, as well as being less potent.

Parabolan is the other choice, and it is very similar to Trenbolone Acetate. The main difference is the ester. Parabolan releases Trenbolone slower and for a longer period, so there are fewer injections involved. There is no difference in the potency of the Trenbolone either.

Trenbolone works as both an anabolic and androgenic booster. It works by increasing ammonium intake of the muscles which boosts protein synthesis. It may also have secondary effects such as suppressing your appetite and decreasing catabolism; an effect thought to be shared by all anabolic steroids, but you should be warned that catabolism will rise when you stop taking the drugs significantly.

One study performed on rats has shown that Trenbolone can cause gene expression of the androgen receptor on the same level as a DHT. This means that Trenbolone can affect male secondary sex characteristics without the need to switch to dihydrotestosterone.

The recommended dosage is the same for both Trenbolone Acetate and Trenbolone Enanthate. The primary difference is how often you take them. Typically you’ll feel that 50 to 100mg of Acetate every other day is good enough, while others may choose to take up to 200mg every other day. Increasing the dosage like this only increases the risk of suffering a side effect. There is no real need to go over 50mg because it doesn’t make the effects more potent; only the adverse side effects. When it comes to Enanthate, it’s best to split 700mg up into two or three injections spread across the week.

Parabolan is an anabolic steroid that has a concentrated strength that makes it unique. One dose of Parabolan comes with 76mg of Trenbolone per milliliter. Essentially it gives you 50mg of active Trenbolone per ampule. When taken as part of therapy Parabolan was administered three times a month at a rate of one ampoule every ten days. If you are using it for enhancing your performance, then it should be taken 3-4 times a week for the best results. You can also take a little more but for the most part, 3-4 a week is all you need.

One of the major positives about Trenbolone is that it won’t aromatize in the body which means that it doesn’t become estrogen. It is still able to cause gynecomastia (man boobs) because of the progestin nature of the drug, however. Some people will try to tell you that you don’t need to take an estrogen suppressor like Clomid, but the fact is that you do.

Some men also report other side effects including night sweats, sleeplessness, headaches, and an elevated heart rate. Some people find that lowering the dosage can reduce these side effects. There are also men that have almost no resistance to Trenbolone and should avoid it.

The History of Trenbolone 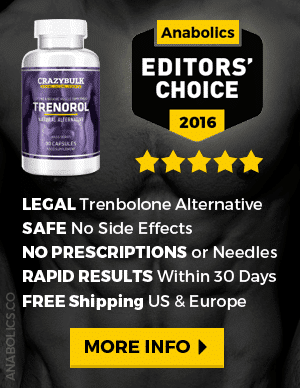 The Trenbolone is one of the most popular anabolic steroids. Unfortunately not as many people understand it or know the real origins of the steroid. It initially entered the market in the 80s under the name Finaject. It has also been called Finajet, Trenbol75, and Agri-Vet. It used to be injected into cattle to boost their lean mass and BMI.

It would also be made available as a capsule known as Finaplix. Finaplex was implanted into the ears of cattle before transported to the abattoir. These pellets ensured that the cows stayed the same weight throughout the transportation process.

Bodybuilders would also use both Finaject and Finaplid to bolster their muscle mass. Trenbolone is different from other steroids in that it doesn’t cause water retention. A factor in why it became so popular with bodybuilders. They wished to avoid water retention and keep their weight at the right level. Finaject and Finaplix haven’t been on the market for almost 30 years now, as production was halted in 1987.

Trenbolone Acetate was also known as Fina. This is because bodybuilders would inject trenbolone by dissolving Finaplex. They would use conversion kits to turn the Finaplix into something that could be injected. Unfortunately, it wasn’t very sterile and would often lead to problems including abscesses and infections.

It was still popular among bodybuilders though because of the affordability and availability of the tablets. There’s no need to go this far now, though, as an injectable form of Trenbolone Acetate can be bought on the black market these days.

Trenbolone is classed as an illicit drug in the United States, and it is a federal offense to possess or use Trenbolone for humans. It’s been classified by the DEA as a Schedule III drug. In Canada, it is classed as a Schedule 4 drug and a Class C drug in the UK. In the UK there is no penalty for possessing or using Trenbolone personally. In Australia it against the law to own or use drugs without a prescription.